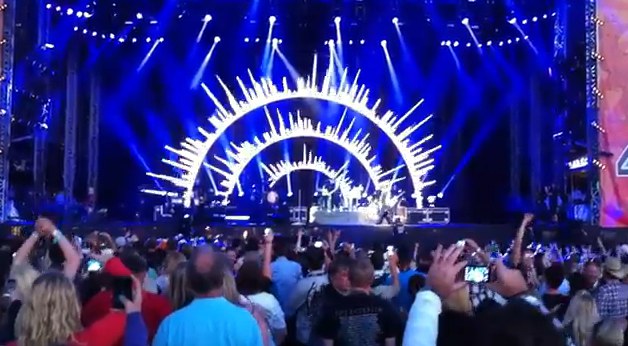 The day got off to a slow start – as lets face it the first few unknown bands were dubious choices to begin with, but were  – but as the sun started to come out we just enjoyed the music and sat on our wee patch.

For me Ray Davies was a surprising hit of the day  – I knew/remebered far more of his work that I realised, and he managed to warm the crowd up perfectly for Bon Jovi.

Sadly, did not manage to enjoy much of the rest of the tents – and to be honest the only one I had any interest in was Imelda May (but having seen her recently at another event decided to stick with Ray Davies). And as Davies finishes his set with old favourites All Day and All of the Night and Waterloo Sunset, we’re all nicely warmed up and ready to go… even from our vantage point at the front of the pile of approx 70,000 we could sense the anticipation as we were crammed tighter and tighter as people josstled to get their positions. With such a huge crowd, surely this gig will get loud?

As JBJ hits the stage – and the setting sun – with his shiny aviators…Jon Bon Jovi opens with Raise Your Hands to a realtivley mild reception from the huge crowd. The fans finally find a voice with the second song –  You Give Love a Bad Name, singing along in a fervour.

A few songs here and there from ‘recent’ The Circle album get a fairly quiet appreciation. But I guess this happens to all bands when they introduce new material at such events.

They perform what is undoubtedly a greatest hits set, with only a few newer/obscure songs make it onto a set-list heavily weighted to the favours older, better-known songs – which to be honest is what we went for!

As the sun sets, and by the time Bon Jovi finish their ‘main’ set with Keep the Faith – with a crowd pleasing rendition of Pretty Woman and a cover of Leonard Cohen’s Hallelujah – everyone is singing and dancing like true fans (even if they were not before they were by now).

Those who had worn out their voices were replaced and found new wind when the return for an encore that includes Wanted Dead or Alive and Livin’ On A Prayer. And a 2nd encore give us Always, These Days and finally finished with I Love This Town.

For some this was not enough, the crowd were still baying for more… Some furiously waving ‘F*ck the Curfew’ banners to entice the band back! Despite his promise to “play ’till the police drag us away”.

Having played over three hours of rocking, the crowd pours out of Hyde Park satisfied, and Bon Jovi leave London in a blaze of glory… (well to Hard Rock Cafe and then The Savoy for the after show party or 2).

Encore 3:
I Love This Town

Will add some picture later!